The Mystery Man at Miller Park

Forgive me for not getting your name yesterday.  I really should have because I wanted to pray for you by name.  My husband's company gets several sets of tickets to Milwaukee Brewers games every year that come available for the employee's use via a lottery system and we just happen to get four free tickets to see the Brew Crew play the Washington Nationals on Sunday, August 4th.

The weather was absolutely perfect for a day at Miller Park, but my anxiety level was still high because - let's face it - I was bringing THE CHILDREN.  Not just the big kids, not just one of them, but all three boys.  Together.  At the same time.

Isaiah was jacked up for his trip to the ballpark and his behavior reflected that.  Every thirty seconds came pleas for cotton candy, sunflower seeds, popcorn, ice cream, balloon animals, face paint, and other such nonsense.  Micah behaved like, well.....Micah and Thomas didn't have a seat so he was basically crawling all over the place for the entirety of the game.

To put it bluntly, I was grateful for my cold beer.

But you were not annoyed by the number of times you were jabbed in the back as Thomas crawled like a monkey from seat to seat.  Instead, you turned around and frequently engaged in conversation with my children, proclaiming that Thomas would be stealing his big brothers' girlfriends in about 15 years so I had better be ready.

You couldn't have been older than 24 or 25 and you were clearly at the ballpark yesterday to spend some time with the lovely young woman you had your arm around.  Still, you made it a point to chat with Isaiah and encourage him to try to catch a foul ball and even took it upon yourself to race him down to the Brewers dugout three times in the middle of innings in the hope of getting a game ball tossed his way.  You promised my son, "We will get you a ball, kiddo." (For the record, Daddy also brought Isaiah down there and struck out as well.)

In the ninth inning, the Brewers were  up by a couple runs and were three outs away from a victory.  You told Isaiah to be ready, that as soon as that third out was achieved, you would bring him down to that dugout and wait for a ball.  This was the time.  This time, for sure, a game ball would be his.

But luck was not on his side, it would seem.  In the crowd of fans all competing for attention, you two came up short.  You walked Isaiah back up to our seats, giving him a reassuring pat on the back, but the disappointment on his face was evident.

That's when you knelt down and gave him a Milwaukee Brewers baseball.  His eyes lit up, he took it from you slowly and you told him, "Hey, I promised you a ball." 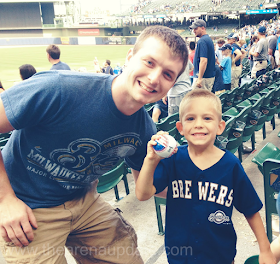 I'm not sure when you got that ball.  Maybe it was a side thought on a run up to the concession stands for a beer or soft pretzel.  Perhaps you left your seat and went to the stores specifically to get Isaiah a ball.  All I know is that you still tried like crazy to get him a game ball, knowing that you had a secret backup plan in place to make my son, a complete stranger to you, feel like a million bucks.

Thank you for what you did for my son at Miller Park on a beautiful Sunday afternoon.  As we were preparing to leave the stadium, I reached out my hand to offer my sincere thanks for your act of kindness.  To my surprise, you pulled me in for a hug.

As we shuffled out of the stadium, Isaiah wouldn't stop talking about his very own Brewers baseball and how it was one of his "special treasures."  It can be so easy to forget sometimes how small acts of kindness can have such a huge impact on our fellow humans.  Holding open a door, offering a seat on a bus or subway, paying for a stranger's coffee.  All teeny little choices that can become a bright spot in an otherwise difficult day.

But you did more than that, sir.  You made my boy feel like a rockstar.  You didn't have to.  You chose to.  And I am sincerely grateful to you for it.  When my wiped-out children were tucked into bed last night, I took a few minutes to thank God for you.  I asked that He bless you and draw near to you wherever you were.  I prayed that the Lord would encourage you and honor your kindness by bringing joy to your heart.

But I would still love to find out your name so I can send you a proper thank you note.  :)

Sincerely,
The Grateful Mother in Row 18

Here are a few more photos from our day out at Miller Park.  It was technically Isaiah's second Brewers game, but he was only 9 months old the last time we took him.  It was the first time being there for Micah and Thomas. 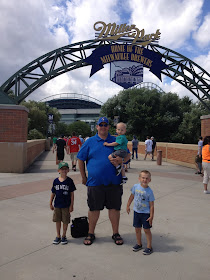 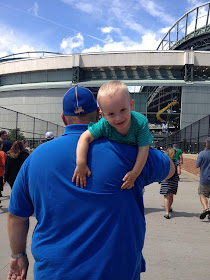 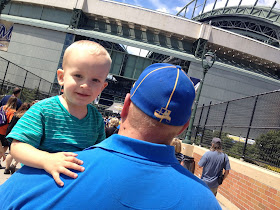 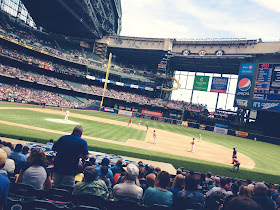 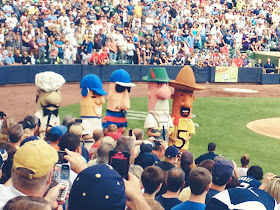 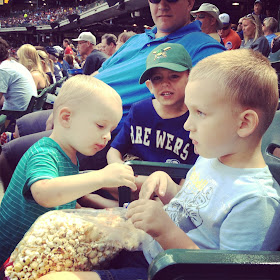 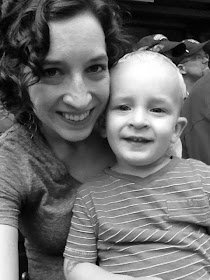 UPDATE 10:20 pm on Monday, August 5th -
So apparently this post has gone VIRAL and I guess I need to do some updating on the situation!  I went to work at 4:00 this afternoon and put my phone in my purse while I waited tables.  When my shift was over, I looked at my phone and was surprised it had not actually blown up from the amount of Facebook messages, Tweets, and emails that had been bombarding my inbox.  And among them?  The name of the Mystery Man who had given Isaiah the baseball.  As soon as I had a chance, I sent him a message on Facebook to personally thank him for the extra mile he went for us.  I haven't heard back from him as of yet.

Also, this story was picked up by TMJ4 and you can read all about it HERE!

On a more personal note, I would really like to express my shock at how this has taken off so quickly.  It is overwhelming and so encouraging that a simple story about a kid and a baseball can "hit someone right in the feelings" (credit: Nathan Lewis) and spread like wildfire.  While the vast majority of comments on this post have been positive, there have been several who have chosen to spin it in a negative direction.  Comments have been made about race, about how we as Isaiah's parents should have been the ones making the day special rather than a stranger, and even some who questioned my mention of having a couple beers at the ballpark (no, I wasn't driving).  Let me make something perfectly clear.  Viral or not, this is MY BLOG.  MY SPACE.  When it comes to hateful, hurtful, inconsiderate, or vulgar language....I will NOT HAVE IT.  There is no way I will allow the story about my son to be treated in such a way.  Therefore, I have chosen to turn on the moderation feature from here on out for the comments on this post.  If you have something ignorant or negative to say, feel free to speak it loudly to yourself because I have no interest in seeing it here.

UPDATE 11:15 pm on Monday, August 5th -
I have successfully contacted the person who gave Isaiah the ball via Facebook and he is being very gracious about this whole thing!  There has been an incredible response to this post that I'm sure he's a bit taken aback by it as well.  I'm trying not to use his name here on the post out of respect for him, but I can definitely confirm that he's being a wonderful sport about all of this!!!  :)

UPDATE 10:29 am on Tuesday, August 6th -
Here's the thing. This story is on the front page on WTMJ and goodness knows where else. If anyone would like to use foul language or start a debate about how this story is dumb because it dealt with white people or heterosexual people or men whatever, be my guest. Feel free to post your comments on the news story website all you want. As for this page, my little corner of the Internet, I protect it. So yes....I will moderate, delete, and filter as I see fit. I understand that many of you may disagree with this, but the decision is final and lies with me alone.